Tonight at 7 p.m. I’ll be reading from and speaking about “Whatever It Takes” at Books & Co. at the Greene in Dayton, Ohio.

This week’s issue of the Minneapolis City Pages has a preview of my reading and talk this Sunday at Magers and Quinn Booksellers:

The book tracks [Geoffrey] Canada’s own tale of escaping the ghetto and attending Harvard, but the real story is his willingness to try anything to change the prospects of Harlem’s kids. His greatest achievement turns out to be the Harlem Children’s Zone, an area of central Harlem where programs educate youth and their parents, as well as prepare kids to compete for education and work opportunities. Tough will discuss his book, which notes the simple things Canada has done (encouraging mothers to read to their kids at an early age) and the more epic accomplishments (opening a school, maintaining long-term success). It is one hell of a story.

I spent an hour this morning on “St. Louis on Air,” on KWMU Radio, speaking with the host, Don Marsh, and taking calls from listeners about Whatever It Takes. You can stream the audio here. Or download it here.

I’m in St. Louis for the reading tonight at Left Bank Books, at 7 p.m.

On October 23 and 24, I’ll be one of the featured authors at the Edmonton International Literary Festival in Alberta. I’ll be reading from Whatever It Takes and taking part in a session on “the craft and discipline of writing nonfiction.”

On Sunday, October 18, at 5 p.m,  I’ll be reading and speaking and answering questions at Magers and Quinn Booksellers, a Minneapolis bookstore located at 3038 Hennepin Avenue South.

On October 12, at 7 p.m., I’ll be reading from the new paperback edition of Whatever It Takes at Left Bank Books in St. Louis.

An account in today’s Daily Pennsylvanian, the student newspaper of University of Pennsylvania, on my reading yesterday at the U. Penn bookstore:

“There is a model here that can work and be adapted in other places,” Tough said. “My hope is that other people building on what [Canada] has done will be able to meet [his] success and surpass it.” 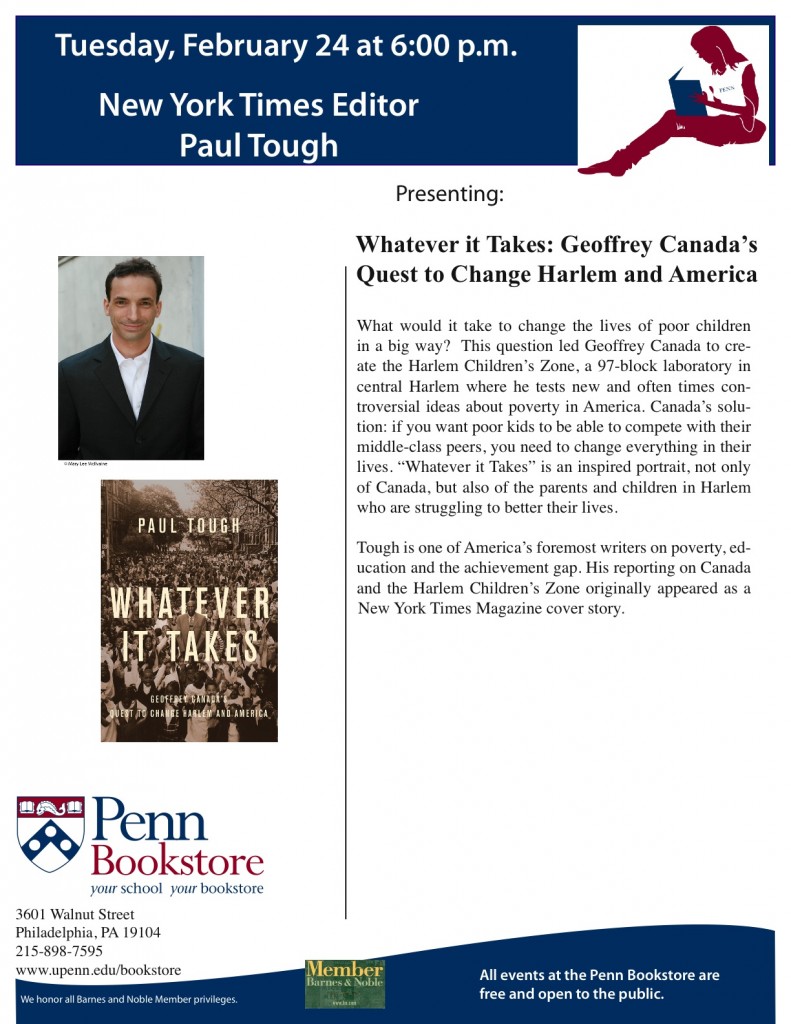 Tomorrow, February 24, at 6 p.m., I’ll be reading from and discussing “Whatever It Takes” at the Penn Bookstore, 3601 Walnut Street, Philadelphia.

I know, February seems a long way off. But for the record: I’ll be reading from “Whatever It Takes” and answering questions at the University of Pennsylvania bookstore in Philadelphia at 6 p.m. on Tuesday, Feb. 24. It’s at 3601 Walnut St.

A reminder: I’m reading at McNally Jackson Bookstore on Prince Street tonight (Wednesday) at 7 p.m. — an evening sponsored by the Desk Set.