On Monday morning, I’ll be giving a speech and sitting on a panel at a community forum in Lame Deer, a small town in eastern Montana, on the Northern Cheyenne reservation. As a post on Indian Country Today explains:

The author will discuss [Geoffrey] Canada’s creation of a cradle-to-college program for children of Harlem, New York. After his talk, Montana residents will talk about what resources worked for them, and everyone will brainstorm how to create an infrastructure that will support youth of the Northern Cheyenne Reservation in their career goals.

The forum is being organized by the Boys and Girls Club of the Northern Cheyenne Nation, which last year became one of 21 community groups nationwide that received a Promise Neighborhood planning grant.

There’s more information in this story from the Billings Gazette, including details on how to RSVP.

As I mentioned earlier, I’m going to be giving a talk and speaking on a panel this Thursday at Georgetown University, at an event hosted by Georgetown and the Cesar Chavez Schools. I’ll be talking about character education and academic achievement.

On March 31, I’ll be giving a keynote address as part of an event about “Character Development and Student Achievement” sponsored by Georgetown University and the Cesar Chavez Public Charter Schools for Public Policy. (Georgetown and Chavez are working together to create a Promise Neighborhood in D.C.’s Ward 7.) There will be a panel discussion following my talk, with Kaya Henderson, the interim chancellor of the D.C. public schools; Jim Shelton, the official in charge of the education department’s innovation initiatives; Irasema Salcido, the founder of the Chavez schools; and Tim King, the founder of the Urban Prep charter schools in Chicago.

For more information, contact Norma Barfield with the Chavez Schools, at norma.barfield@chavezschools.org.

Next Saturday morning, Nov. 6, I’ll be in Shaker Heights, Ohio, taking part in a panel called “Leading Journalists Assess the Progress of School Reform.” The panel is part of the Education Innovation Summit organized by the Hathaway Brown school. As this story in the Cleveland Plain Dealer explains,

“The idea is to bring together a lot of talented people and have them share their perspectives on new and better ways of educating,” said William Christ, the head of school. “We’re thinking it will have a ripple effect and contribute to the national conversation.”

Recent blog posts on “Whatever It Takes” from a reference librarian in Perrysburg, Ohio; a student at the Clinton School of Public Service in Little Rock; a Microsoft executive in Seattle; and an early-childhood specialist in Chicago, who posted her reflections on the panel discussion I was a part of at Loyola University Law School in February:

I also think that there are many, many people in non-profits who are tired of business-as-usual, tired of feeling like their work is a drop in the ocean, tired of talking themselves into believing in what they do every day.  Some of those people must have been in the audience that night, looking for a thicker strand of hope to pull on.

From what I’ve read, hope is much of what Geoffrey Canada’s concept is riding on now: hope with an almost desperate promise of metrics, if we could all be patient for a while.  And many of us are willing to be patient, because we believe as we have believed for years, that he’s making it happen – he’s doing it.  He’s doing what we thought should be done all along: comprehensive services, for all stages of childhood, supportive of the family and community as well as the child.  This is the silent promise we’ve been imagining, and Canada actually managed to speak the promise out loud.

From the Loyola Law School web site, a report on last week’s event:

The forum, which included a keynote address by author and former New York Times magazine editor Paul Tough (pictured left), explored the The Harlem Children’s Zone approach to inner city education, as well as addressed the recent plans by the Obama administration to offer new funding to replicate twenty “Promise Neighborhoods” throughout the country. … 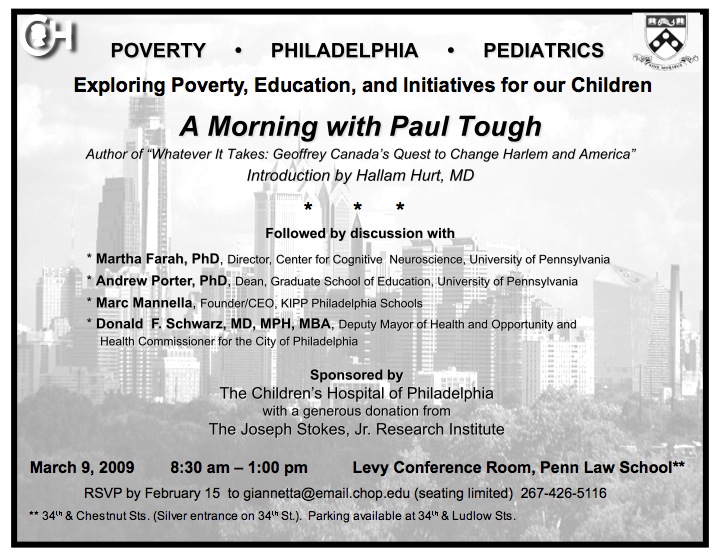 Attention Philadelphians: Next Monday, March 9, from 8:30 a.m. to 1 p.m., I’ll be taking part in a panel discussion about Whatever It Takes sponsored by the Children’s Hospital of Philadelphia. The event will be hosted by Hallam Hurt, a neonatologist at CHOP, and will include remarks from Martha Farah, a cognitive neuroscientist whose research appears in the second chapter of the book. Check out the flyer above for more details.

Discussing Whatever It Takes and the Harlem Children’s Zone with (from left) Robert Gordon, Roland Fryer and Geoffrey Canada at the Center for American Progress, Washington D.C., October 23, 2008.