I was interviewed recently by Aleksandra Kaniewska, a Polish journalist working for Civic Institute, a think tank in Warsaw, which just published the interview as a Q&A in their web magazine, translated into Polish. Unfortunately, I don’t understand Polish, so I can’t read it, but apparently I said:

which according to Google Translate, means:

It is not, therefore, is that one day children are passionate about politics, and a second ride on a snowboard, but stubbornly sought to order their choice, whatever it is. Unfortunately, most schools do not verify and does not produce self-control skills and perseverance. And they are essential to a happy and fulfilled life!

Yesterday on Early Ed Watch, a blog about early education from the New American Foundation, Lisa Guernsey, the director of the foundation’s early education initiative, published a Q&A that she did with me on early education, my new book, the Harlem Children’s Zone, and “Waiting for ‘Superman,'” among other topics. An excerpt:

I’m working on a new book that has me back out visiting a lot of schools, and I’m interested in the so-called non-cognitive aspects of persistent poverty and educational opportunities that help people escape from poverty.  I’m looking at how – both at the preschool level and also the high school level – interventions may focus on aspects of character or personality or executive function. For me personally that’s the most interesting thing going on out there. It’s really early and less connected and less well-formed as an argument than what I was writing about in Whatever it Takes, but it contains the germ of having new ways of thinking about poverty and what is going on in the lives of poor kids and what kinds of interventions might get them out of poverty.

In an interview with Ezra Klein on the Washington Post’s website, the economist James Heckman (who I wrote about in my book and in the New York Times Magazine) has some kind things to say about my recent op-ed, but is less optimistic than I am about Promise Neighborhoods:

Heckman: Look, President Eisenhower built the highway system. President Obama could build the child production system if he wanted to. It would have a much higher payoff than a lot of the programs that are currently there. If you do a cost/benefit analysis of the rate of return for job training, if you talk about early convict rehabilitation programs or literacy training for adults, the rates of return on those programs are generally quite low, very low. It’s just a question of using the same dollars wisely.

Last week there was a great op-ed piece in the New York Times by Paul Tough. He pointed out that we’re spending billions, $8.2 billion a year on Head Start, and Head Start is not a very effective program.

If you had an enriched version of Head Start and invested the same amount of money, you’d get much higher payout in the long run. Each of these programs has a political barnacle connected with it. People are promoting it because they see some advantage, but at the same time there’s really no value in those programs. The point is it’s not a question of raising new money, it’s a question of using existing money wisely.

Klein: If somehow the economy gets to a place where [the Obama administration] can move on to other issues, what would a good first step, federally, be, in moving toward high-quality early education?

Heckman: What you do is move beyond the Harlem Children’s Zone focus that seems to have gripped the administration. That’s fine, but it hasn’t really been evaluated in any serious way yet and it’s not clear that’s the answer.

The key idea is to encourage more experimentation across a broader range of projects, targeting a larger range of people and providing a refocus of what these programs are all about, which is teaching aspects of self-confidence and teaching these soft skills which are typically ignored in a lot of social and political life. 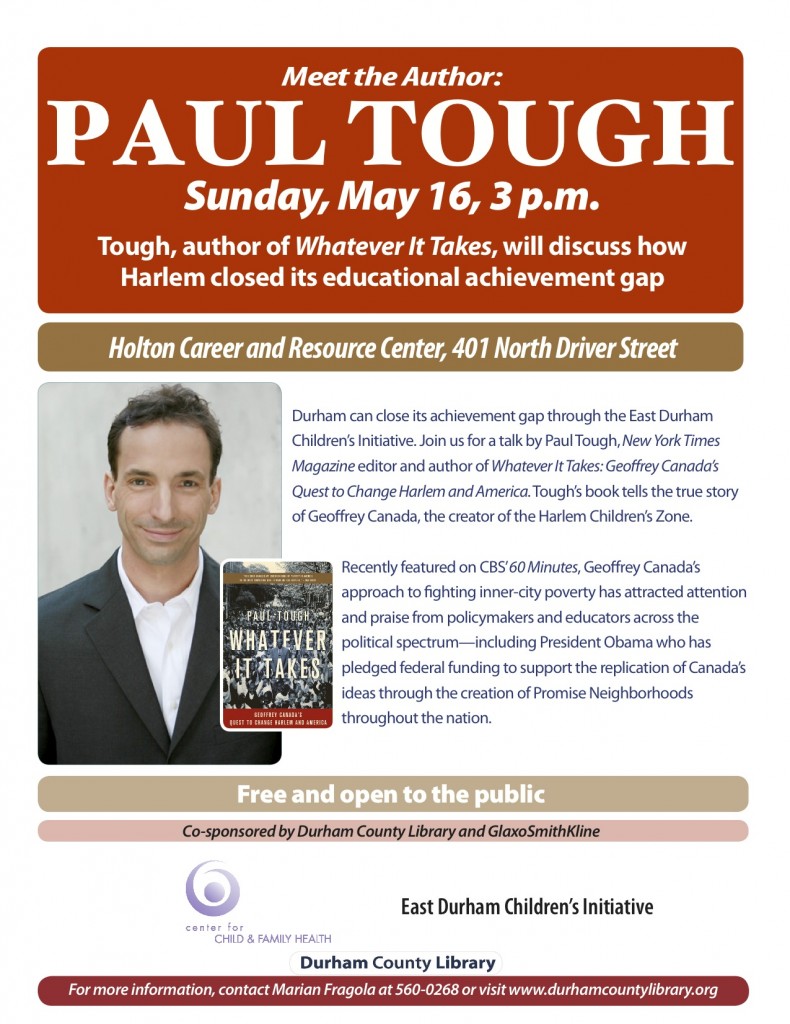 From today’s Durham News, a fairly stream-of-consciousness Q&A about my talk in Durham this coming Sunday, in which I say things like:

I think my one worry about the success of the Harlem Children’s Zone is people are going to think it is easy. They look at how the Harlem Children’s Zone is now, and don’t see all of the hard work, wrong turns, and dismal failures that went into making it the success that it is today. What I think any community will need if they are going to try to do this is persistence, dedication, faith, a long term vision, and a sense that they are going to do whatever it takes.

Geoffrey Canada was interviewed by West Virginia Public Broadcasting about the Harlem Children’s Zone and the possibility of replicating his model in West Virginia. You can listen to the audio here.

From two very different publications, articles about the Harlem Children’s Zone and the prospect of Promise Neighborhoods. In Real Change News, a weekly paper sold by the homeless in Seattle, an interview with Geoffrey Canada, in which he recounts the advice he has given the Obama Administration about Promise Neighborhoods:

We felt like they had to go with the right leadership. They had to get communities that were already down the road on figuring out their area and working out the collaboration issues. There had to be some structure for management in place, and there had to be resources so that it wouldn’t be under resourced, and a real commitment of local leadership — for the vision of the community and not for the individual schools. We thought those were some of the must-haves in the first few of these that have come up. So we’ve had those kinds of conversations with the administration.

And in Forbes, Nicole Perlroth cautions:

Any school rescue program that relies less on donations and more on taxpayer money is at risk of becoming a captive of the education establishment. A two-year project to replicate the Zone in Jacksonville, Fla. saw its largest private donor, the Chartrand Foundation, back out when it appeared that the program would be run by government officials and lack the Zone’s accountability.

Rob Wildeboer, a criminal-justice reporter for WBEZ radio in Chicago, hosted the panel discussion that followed my speech at Loyola University Law School last week. Before the event, Rob and I sat down in the WBEZ studio for an interview about the Harlem Children’s Zone and Promise Neighborhoods. The interview aired on Friday as part of the local “All Things Considered” broadcast. Here’s the audio.